We are very proud to say that we have won another 2 Awards at the Ray White Annual Awards for 2012 which was held on Saturday the 16th of March.

Geoff Boothroyd won the ‘Partner Support Award’ which was very well deserved. Geoff is husband to our Principal Jo Boothroyd and has become a vital member of our team. Geoff is always available to give a helping hand, whether it’s helping the staff do letter box drops around the town, completing ‘handy-man’ jobs at either of the three offices, or his simple support to his very busy wife Jo- the award couldn’t have gone to a better candidate. We are very lucky to have Geoff a part of our team & thankful for all the work he does for our offices. The second award of the night went to young gun Kevin Chokshi! The won the competition and award for ‘Novice Auctioneer’ he competed in a competition with around 20 other Sales members from different Ray White offices around the state & was crowned the best Auctioneer of the group. Kevin is overwhelmed with excitement and happiness for receiving this award. He worked extremely hard to lead up to his first Ray White award. After only being in Real Estate for 12 Months on Sunday, he could not be happier being named one of the best Auctioneers in the business. If you would like your property to be Auctioned off by one of the greatest- Call Kevin Chokshi 0430 195 517 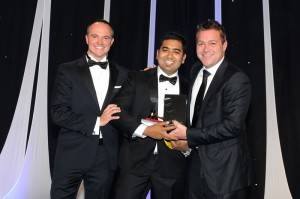 Along with these two winners we were lucky enough to receive the following awards:

Well done to all of our amazing team!